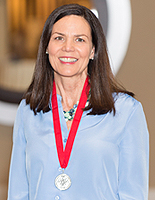 Anne Marie started her radiation oncology career as a radiation therapist at the Georgia Radiation Therapy Center at the Medical College of Georgia. After three years as a clinical preceptor, she was offered the position of Interim Program Director of Radiation Therapy at the Medical College of Georgia. She accepted the Program Director position and maintained this for 28 years. In 1991 Anne Marie developed a baccalaureate degree medical dosimetry program, which was one of the first five programs recognized by the AAMD. She served as the Program Director of Medical Dosimetry and Radiation Therapy until her retirement in 2010. Following her retirement, Anne Marie accepted a position as a medical dosimetrist at Aiken Regional Medical Centers in South Carolina, where she enjoys clinical patient contact.

In February 2014, Anne Marie accepted the position of Medical Dosimetry Clinical Educational Coordinator at the University of Wisconsin-La Crosse.

Throughout her career, Anne Marie has published numerous articles in peer reviewed radiation oncology journals and authored several books. She said that she's most proud of developing and writing material for these textbooks: Portal Design in Radiation Therapy and Radiation Therapy Essentials: a Board Preparation Tool. Anne Marie has served AAMD in many different volunteer capacities. She has been an active member of the AAMD Education Committee, as well as a trustee of the AAMD Education and Research Foundation. She currently holds the position of Secretary of the Foundation's Board of Trustees. She has also served on committees and task groups for the Medical Dosimetrist Certification Board, the American Society of Radiologic Technologists and the American Registry of Radiologic Technologists.