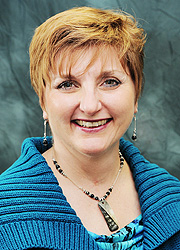 There is a relatively small population of individuals who seem able to build relationships, trust and rapport with almost everyone. These individuals are then able to develop those relationships and create positive connections between people, thereby creating alliances, providing direction and establishing forward momentum to "get things done."

Theresa Kwiatkowski is certainly someone who fits this description. With an enthusiastic and genuinely friendly attitude, Theresa radiates a sincere passion for the medical dosimetry profession. Through her strong will and always engaging personality, she is able to motivate people for the betterment of her profession.

A radiation therapist RT(T) by training, Theresa earned her A.A.S. in radiation therapy at Erie Community College in 1978 and spent four years as a staff radiation therapist in Evansville, Indiana. Relocating to upstate New York in 1982, Theresa accepted a position at Strong Memorial hospital and after six months advanced into an on-the-job training position in medical dosimetry. In 1989 she accepted a senior dosimetrist position at Highland Hospital and for the next eighteen years continued to develop her skills and experience. Theresa passed the medical dosimetry board certification exam in 1991. In an effort to broaden her knowledge base, she returned to school in 1994 and earned her B.S. in physics from Empire State College. She is currently the senior medical dosimetrist at the Lipson Cancer Center at Rochester General Hospital in Rochester New York.

To call Theresa an active member of the AAMD is an understatement. She has served in every imaginable capacity of the profession. She has been the Writing Competition Chair for almost 20 years. She has also served as the Region IV Director and has participated in numerous Task Groups. In the highest form of service, Theresa served the three-year commitment as AAMD President-elect, President and Immediate Past President. She continues her valuable efforts as the Chair of the AAMD Education and Research Foundation.

Theresa has been a speaker at national conferences and has published several papers, which have been featured in eRADIMAGING and Advance and the recently published and well-received ASTRO document Safety is No Accident.

Theresa and her husband, Ed, live in Rochester, New York. They have three children, two grandchildren and two dogs. When not devoting her energies to work, the profession, or the Foundation, Theresa has a variety of activities and interests. She is actively involved in the faith community at Our Lady of Lourdes Parish as a social committee member and a lector. Theresa is proud to be a member of the Blue Star Mothers from the Upstate New York area who have children serving (currently or previously) in the United States armed forces. Theresa is interested in photography and travel. She recently returned from an African safari, where she spent time photographing the elephants, lions and wildlife that inhabit the Tanzanian national parks. Theresa enjoys scuba diving in warm waters and photographing the variety of underwater life.

Theresa would like to thank the AAMD. The highest honor is to be accepted as a Fellow of the AAMD, and she is proud to have participated in and contributed to the growth of the medical dosimetry profession. She appreciates the support of her colleagues, friends and family.