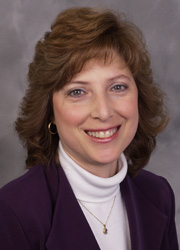 Mary was born in Utica, NY and while she was still in elementary school, her family moved to the suburb of New Hartford. Upon graduating from New Hartford Central School, Mary entered the Radiation Therapy Technology program at the State University of New York (SUNY) Upstate Medical Center in Syracuse, New York where she earned an Associates in Applied Science degree in 1979. She stayed on as a Radiation Therapy Technologist after graduation and worked there for one year. During that year, she married her husband, Christopher. Chris was accepted into the Diagnostic Ultrasound program at Seattle University, so they moved to Seattle, Washington where she was employed at the Mason Clinic. Even though Mary was hired as a Radiation Therapy Technologist, she very soon had the opportunity to begin on-the-job training in Medical Dosimetry under the tutelage of Penny Martinsen and eventually became a Medical Dosimetrist there. After Chris graduated, they returned to Syracuse where Mary was then employed at Radiotherapy Associates of Upstate New York sharing responsibilities as a Radiation Therapist and Medical Dosimetrist. After one year, Mary returned to Upstate as a Radiation Therapist and, when the opportunity arose, began working as a Medical Dosimetrist once again. During this time, she began to work toward her Bachelor's degree; with the help of Daniel Bassano, PhD, Satish Prasad, PhD, and Charles Chamberlain, PhD, she graduated in 1988 from SUNY Empire State College majoring in Medical Radiation Physics. This was also the year that Mary took and passed the Medical Dosimetrist Certification examination. Shortly thereafter, Mary and Chris adopted their two children, Maria and Patrick. In 1993, Mary accepted the position of Instructor in the Radiation Therapy Technology program at the re-named SUNY Upstate Medical University, the same program she had graduated from. Afterwhich, she began working on her Master's in Education degree majoring in Vocation-Technical Education which she completed in 1998 from SUNY Oswego. Upon completion of her degree, she was tenured and promoted to Assistant Professor.

It was also during this time that Mary began her professional volunteer work. In 1994, she was elected onto the Medical Dosimetrist Certification Board (MDCB) as an at-large member. During her six year term on the MDCB, she held the offices of Secretary, President-elect, President and Past-president. She also served on the Test Development committee (four years as chair), by-laws committee (four years as chair), Eligibility committee (one year as chair), Continuing Competence committee, and Publishing and Marketing committee. She also served as the MDCB liaison to the Medical Imaging and Radiation Oncology Data Alliance (MIRODA) for two years and chaired the Medical Dosimetrist Scope of Practice Research committee; this project culminated in the "Medical Dosimetrist Scope and Standards of Practice". Other activities included representing the MDCB at the ASRT's "Medical Imaging and Radiation Oncology Core Curriculum and was an integral member in establishing the MDCB's ADA policy and the Ethical Standards. Mary also established, designed and was webmistress of the MDCB's initial website.

Mary's activities in the AAMD began before being elected as President-elect of the AAMD in 2002; she became a member of the Education committee in 1998. In addition to the Education committee (eight years as co-chair), she has served on the Government Relations, Executive, Information Technology (five years as co-chair including being Web Content Manager for four years) committees. She was also the AAMD liaison to the Alliance for Quality Medical Imaging and Radiation Therapy (AQMIRT) for seven years as well as the AAPM and ACMP for four years. Mary greatly enjoyed her offices of President-elect, President and Past-president; she feels that much was accomplished and is delighted to have been a part of the growth of the Society during this time.

Before the JRCERT created a Medical Dosimetrist Board of Directors position, there was the Medical Dosimetry subcommittee. Mary served on this committee from its creation in 2003 until it was dissolved in 2009. Mary was also privileged to have received the AAMD/Varian Award of Excellence in 2006. Professionally, in 2008 Mary decided to return to her roots and accepted a position as staff Medical Dosimetrist at the University of Rochester in Rochester, New York where is currently employed.

Additional activities include a book review, journal article reviewer, RT Image contributor, co-author of several articles, and being a speaker at numerous local, regional and national meetings. In her spare time she enjoys singing in her church choir and has recently become a Pet Therapist where she visits a hospice with her two schipperkes, Cruiz and Rhode.

Mary would like to thank the AAMD, is honored to be accepted as a Fellow of the AAMD and is proud to have participated in and contributed to the growth of the AAMD, MDCB and the profession of Medical Dosimetry. More importantly, she is appreciative to have had the opportunity to meet so many wonderful people and to have made good friends while along this journey. All of her activities would not have been possible without the help and support of her family, friends, co-workers and colleagues for which she is extremely grateful.