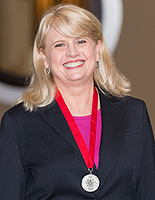 Paula is a native Texan who graduated from Texas A&M University in 1979 with a Bachelor's Degree in Microbiology. In 1985, Paula learned about medical dosimetry and began her career in the field at MD Anderson Cancer Center that year. In 1990, Paula left MD Anderson and went to work at The Methodist Hospital in Houston. In April 1993 Paula returned to MD Anderson as a medical dosimetrist in the Brachytherapy and Special Dosimetry Section. She has been in her current position for over 21 years. Paula passed the MDCB exam in 1998.

Paula's volunteer work for the AAMD began in 1999 with the Education Committee, where she served as a committee member until 2007. In 2007 she became the Education Committee co-chair where she continues to serve today. Paula had the privilege to serve the AAMD as President and fulfill her presidential term from 2006 - 2009. She was one of the three initial incorporators of the AAMD Education & Research Foundation in 2010. Other areas of service with the AAMD have included co-hosting the AAMD 29th Annual Meeting in 2004, serving as the AAMD liaison to ASTRO / ACMP/ AAPM / ASRT in 2008 - 2009, participating in the Fellows Task Group from 2009 - 2012 and chairing the Task Groups that reviewed and updated the Scope of Practice and Practice Standards in 2010 - 2013.

In scholarly and academic work, Paula has published as co-author in the peer-reviewed journals: Medical Dosimetry; International Journal of Radiation Oncology, Biology, and Physics; and Physics in Medicine and Biology. She is a manuscript reviewer for the journal Medical Dosimetry. She has presented at numerous AAMD annual meetings and also participated in the ASTRO 49th Annual Meeting Nurses Program in GYN Oncology. She has also been active as a clinical and didactic instructor in the MD Anderson Cancer Center School of Health Professions in both the medical dosimetry and radiation therapy programs since 1993.