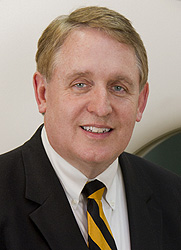 Dr. Robert Adams received his master's degree in Health Policy and Administration from the University of North Carolina (UNC) at Chapel Hill and a doctoral degree in Higher Education Administration from North Carolina State University. In addition, he is certified in radiography, radiation therapy and medical dosimetry. He is an assistant professor in the Department of Radiation Oncology for the UNC School of Medicine.

Internationally, Robert is currently the Deputy Editor of The Journal of Medical Imaging and Radiation Sciences (Le Journal De L'Imagerie Medicale Et Des Sciences De La Radiation), the professional radiologic sciences journal of Canada. Robert recently completed a research project in England focusing on occupational burnout that was presented to the British Occupational Labor League and published in the British Journal of Radiology. In Australia, he is working with colleagues at Monash University and recently completed several research projects that were presented and published at the National Australian Radiologic Sciences Conference in Tasmania. In addition, a collaborative research project between Robert and three Canadian colleagues was presented at the National Canadian Radiologic Sciences Conference on comparing communication levels between U.S. and Canadian radiation therapists and medical dosimetrists.

In the U.S., Robert is a Directed Journal Reading Editor for the AAMD journal, Medical Dosimetry. He served nine years on the editorial review board of the American Society of Radiologic Technologists Journal, Radiation Therapist: The Journal of the Oncology Sciences, where he was also chairman.

Robert is the current National Chairman of the American Society of Radiologic Technologists (ASRT) Research and Grants Council. He recently served seven years on the National Board of Directors for the Medical Dosimetry Certification Board (MDCB) and was chair of the Test Development Committee.

Robert has given more than 120 speeches for continuing professional education and recently published his 43rd peer review article. He has written 20 abstracts and eight book chapters.

He is the primary investigator of a five-year, 1 million dollar federal R-25 cancer education grant submitted through the National Institutes of Health (NIH) for developing computer-based medical dosimetry learning modules. His cancer education grant team received the 2012 Educational Idea of the Year Award at the American Association of Physicists in Medicine national meeting in August 2012. The group also presented their research at the International Society meeting in Toronto in June 2012.

Robert thanks the AAMD for this honor. It is a privilege to be accepted as a Fellow of the AAMD, and he is proud to have participated in and contributed to the growth of the medical dosimetry profession. Robert has met many people over the years who have become such close friends. He appreciates the support of his colleagues, friends and family.